To celebrate the launch of its halloumi-themed pop-up “Say Hallou-mi to Cyprus!”, the Cyprus Tourism Organisation (CTO) has unveiled portraits of Cyprus’ best known celebs, made from halloumi!*

The CTO worked with renowned food artist Prudence Staite to create the profiles, each of which have been carefully burned onto slices of halloumi.

Whereas many other cheeses would melt when subjected to high temperatures, the Cypriot national cheese is known for its very high melting point (that’s why it’s so perfect for grilling on BBQs). This meant the artworks could be created by charring the designs onto the cheese without it melting.

The celebrities depicted in the halloumi portraits are: 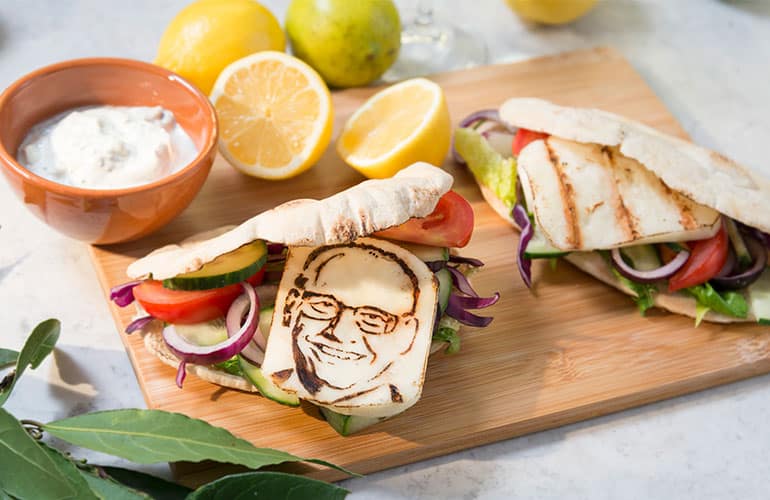 Dragon’s Den star, retail entrepreneur and proud Cypriot Theo Paphitis was born in Limassol in 1959. Theo is Founder of the Theo Paphitis Retail Group, which encompasses Ryman Stationery, Robert Dyas and Boux Avenue. The combined group comprises over 350 stores and 4,000 employees who serve over 28 million customers a year.

Theo Paphitis, who is supporting the ‘Say Hallou-mi to Cyprus!” pop-up restaurant campaign, said: “Cyprus and its food are true passions of mine and the pop-up restaurant will bring the delicious Cypriot cheese, halloumi, to every dish on the menu…even the dessert!  I’m sure many other people will fall in love with the Cypriot national cheese once they’ve tried it – and perhaps even visit Cyprus to discover the rest of the island’s delicious cuisine and wine.” 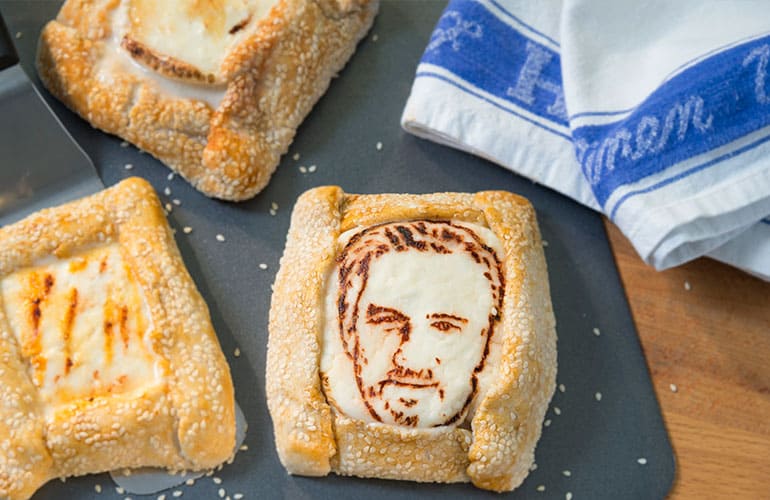 British baker Paul Hollywood worked in Cyprus for six years before returning to the UK and rising to fame as a TV chef. He was working as Head Baker at the 5* Annabelle hotel when he met his wife, Alexandra, who was a scuba diving instructor at the time. The couple married two years later in Cyprus and return to the island regularly for family holidays.

Paul’s portrait has been charred into ‘flaounes’, a Cypriot cheese-filled pastry which is usually topped with sesame seeds. 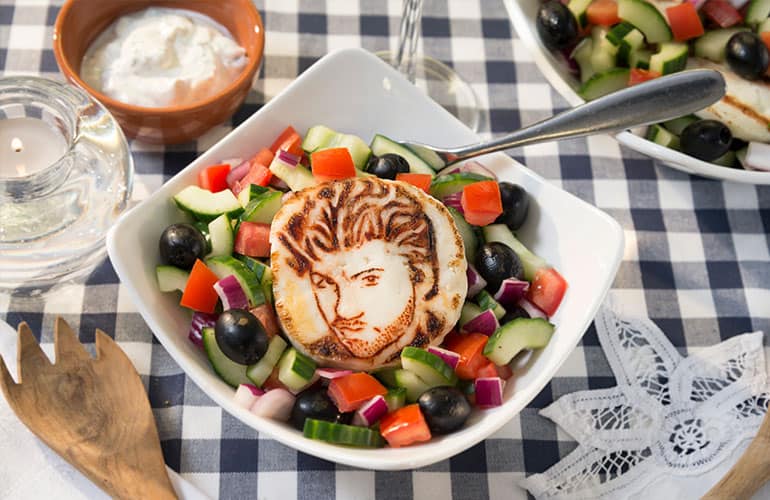 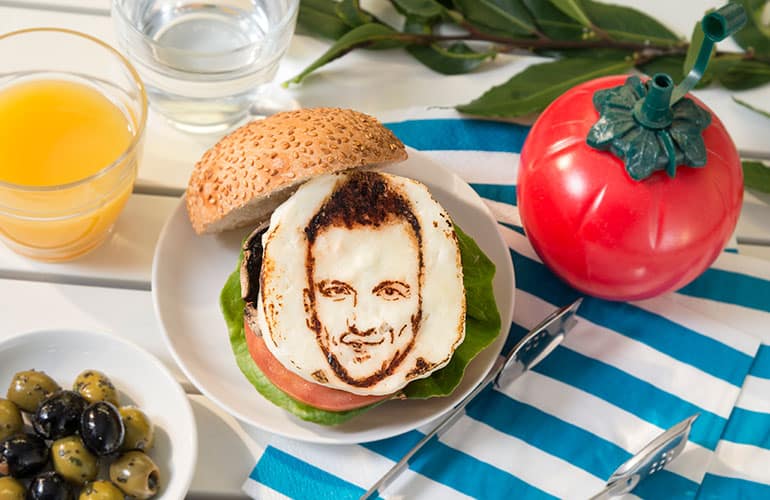 Australian singer-songwriter, presenter, TV personality and businessman Peter Andre is of Cypriot descent; his family relocated from Cyprus to Sydney in 1979 but Peter still returns to the island for family holidays.

The artwork of Peter’s face, burned onto a halloumi and mushroom burger and lying next to a pair of BBQ tongs, hints at his Australian nationality. 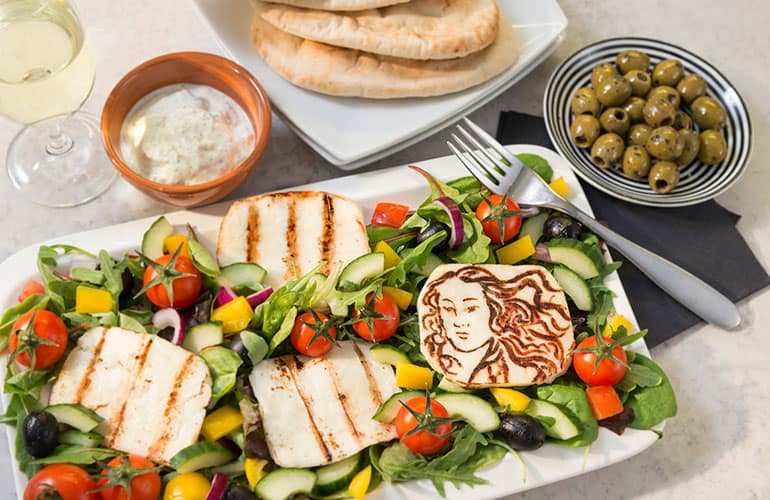 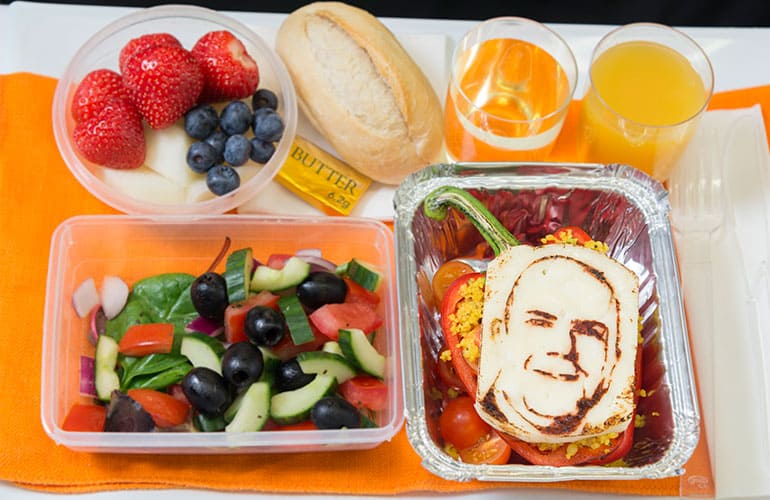 Self-proclaimed “serial entrepreneur” Sir Stelios Haji-Ioannou is best known as the Founder of easyJet. His father’s family comes from Pedoulas village, high in Cyprus’ Troodos Mountains, and his mother’s family comes from the village of Laneia, located at the bottom of the mountains. Sir Stelios’ portrait has been created on a stuffed pepper and laid out on an airline tray.

Orestis Rossides, UK Director of the Cyprus Tourism Organisation, said: “We’re delighted with the hugely positive reaction to the launch of our halloumi-themed restaurant and hope these halloumi artworks are just as popular. We’re so proud of the celebrities with Cypriot-links who have made a name for themselves here in the UK and these artworks are a light-hearted recognition of their successes.”

The CTO’s halloumi-themed pop-up restaurant, ‘Say Hallou-mi to Cyprus’, which has been designed to entice people to visit Cyprus by showcasing its national cheese, will open at 100 Hoxton for two weeks from tomorrow, Monday 13th November.

Cyprus – the third largest island in the Mediterranean – attracts over two million tourists annually. Cyprus is a year-round island appealing to a wide range of personal tastes and lifestyles, from families and couples, to the most discerning of culture and nature-oriented travellers. For more information, go to www.visitcyprus.com, www.facebook.com/visitcyprus.uk or www.twitter.com/visitcyprus.

Notes to Editors
*These images have been created to pay respect to each celebrity and show Cyprus’ pride in the success of people with close links to the island. Please note, unless stated, the images have not been endorsed by the celebrities themselves.

About the Cyprus Tourism Organisation
Cyprus – the third largest island in the Mediterranean – attracts over two million tourists annually. Cyprus is a year-round island appealing to a wide range of personal tastes and lifestyles, from families and couples, to the most discerning of culture and nature-oriented travellers.

Tourists are attracted by the island’s legendary hospitality, glorious coastline and stunning mountain villages. There is something to suit everyone – family resorts, world class spas, golf courses, marinas, agro-tourism and food and wine trails. The active can enjoy the warm waters of Cyprus for diving and waterskiing while adventure seekers can explore the island’s beauty with trekking or bird-watching tours, while golfing enthusiasts play on award winning courses.

The island boasts the cleanest bathing waters in Europe, combined with a rich cultural heritage, a variety of agro-tourism projects and a wide choice of special interest activities.