Need to Get Some Practice in Before Wimbledon? London’s Tennis Courts One Third of the Price of Tokyo’s

Need to Get Some Practice in Before Wimbledon? London’s Tennis Courts One Third of the Price of Tokyo’s

As tennis courts book up during Wimbledon season, ECA International reveals how much you could pay to play in the capital cities of the world’s top tennis players.

It is now less than a week to go until the Wimbledon Championships begin! ECA International’s latest Cost of Living Survey reveals that Central London’s tennis courts are a third of the price to rent per hour of Tokyo’s. ECA’s latest findings review the cost for expatriates to hire out tennis courts in the capital cities of the world’s top tennis players.

As UK cities drop out of the top 100 most expensive cities to live in, Central London’s courts now cost £12.10 per hour. While for Andy Murray in Scotland, Edinburgh’s are even cheaper, available to hire at £9.40 per hour.

Tokyo comes out as the most expensive location to hire a court out of the capital cities of the world’s top-seeded tennis players, costing around £35.90 per hour. This is a whopping £29.10 per hour more than Elina Svitolina’s Kiev, Ukraine.

Moscow, in Russia, is the most expensive sample city in Europe, with tennis courts costing £31.40 per hour to hire; almost £20 more than Central London.

“For people working or travelling abroad, there will always be surprises when everyday services carry massive premiums or offer fantastic value, and leisure services are no exception, with a tennis court costing nearly £30 more to rent per hour in Tokyo than in Kiev,” said Steven Kilfedder, ECA International’s cost of living expert. 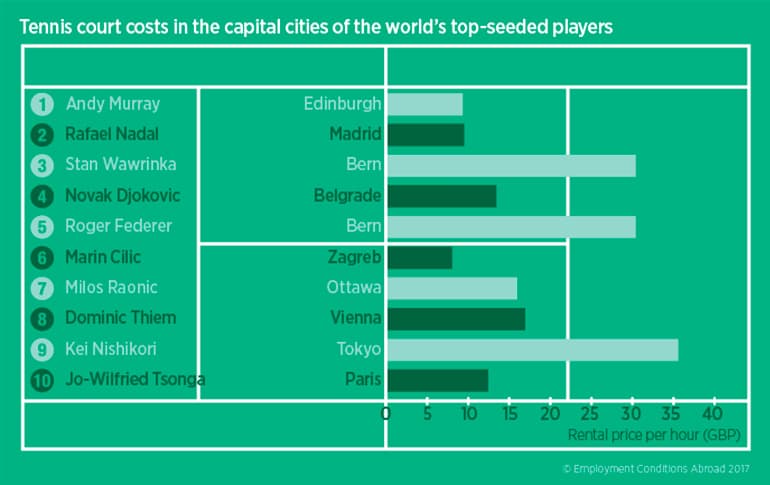 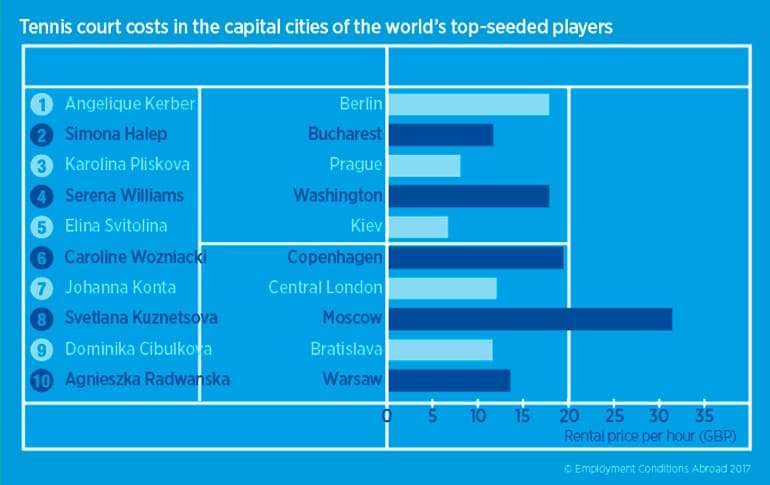 Tokyo is the 7th most expensive city in the world according to ECA’s latest cost of living rankings. The comparative strength of the Swiss franc has contributed to Switzerland remaining as one of the most expensive countries surveyed in the world, with Zurich 3rd globally, Geneva 4th, Basel 5th and Bern 6th. Kiev, which is currently ranked 257th, remains one of the cheapest locations in the world for expatriates.

Published by ECA, the world’s leading provider of information, software and expertise for the management and assignment of employees around the world, the Cost of Living Survey compares a basket of 163 like-for-like consumer goods and services commonly purchased by international assignees in over 460 locations worldwide. The survey allows businesses to ensure that their employees’ spending power is maintained when they are sent on international assignments. ECA International has been conducting research into cost of living for over 45 years.

Luanda is now the most expensive location in the world for expats
Luanda has risen from 8th position last year to top ECA’s global rankings this year.

“Prices of goods typically purchased by international assignees in Luanda, which were already high due to poor infrastructure and strong oil-fuelled demand, have been pushed up much further in the last year. The Angolan kwanza is increasingly overvalued, which raises related costs, while the continued weakness of the black-market exchange rate has also inflated prices of imported goods,” added Kilfedder.

Partnering with thousands of clients on every continent, ECA provides a fully-integrated suite of high quality data, specialist software, consultancy and training. ECA’s unparalleled insights guide clients as they mobilise their most valuable resource: people.

ECA makes the complex world of international mobility simple, providing clients with the expertise and support they need to make the right decisions – every time.

Cost of living indices are used by ECA clients to calculate cost of living allowances for assignees. The survey covers:

Certain living costs such as accommodation rental, utilities charges (electricity, gas, and water), car purchases and school fees are not included in the survey. Such items can make a significant difference to expenses but are usually compensated for separately in expatriate packages.

This comparison of cost of living was calculated on a base composed of various developed countries and is used to reflect an international lifestyle. Other indices available from ECA reflect specific city-to-city comparisons and different levels of shopping efficiency.